There are five main ways to distinguish high strength national standard bolts from fake bolts:
1. Look at the logo, the packing box of the general bolt has the logo. It is divided into 8.8, 10.9 and 12.9 grades. Generally, there is no grade mark on the hexagonal plane of hexagonal bolts. Generally, high strength bolts have strength expression. For example: 8.8; but note that there are too many counterfeit and inferior goods nowadays, we should also pay attention to the purchase channels and the inspection and acceptance of goods.
2. Internal hexagonal bolts are generally of higher grade. The reason is that the inner hexagonal holes of internal hexagonal bolts are generally required to be used only after heat treatment. The materials that can improve hardness after treatment are quenched and tempered steel, and the mechanical strength of quenched and tempered steel is high after quenching and tempering.
3. High strength national standard bolts without galvanizing are generally black. The black outer layer is an oxide layer formed by artificial processing, which is called blackening in industry. It is a protective layer formed by corrosion of strong alkaline substances on metal surface, which can resist oxidation. There is also a process called Falan, which has the same function and principle. So high-strength bolts are generally not rusty!
4. The simplest experience judgment: throw into the ground, listen to the sound, the high-intensity sound is brittle, the sound is very bright is steel, using saw blades and other hard tools scratch test, the surface hardness of high-strength bolts are larger than the surface hardness of ordinary bolts.
5. Question of tempering, general high-strength material is not tempered 8.8 level, some businessmen may not temper when 12.9 or 10.9 level sold to customers, this method of identification is to see, in the sunshine, not tempered dark color, overtempered is color, will be burned color, this is the most basic common sense. 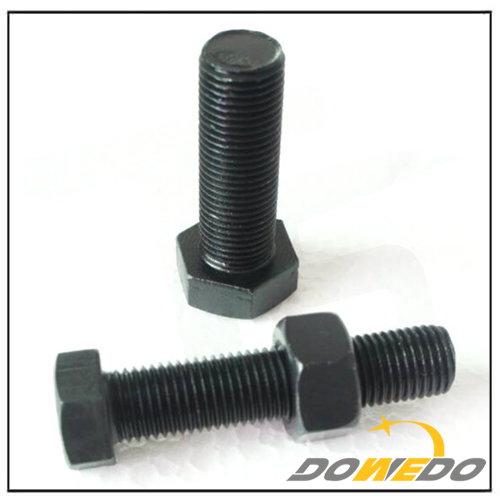